Above was just a breakdown table, this is a more detailed explanation of each feature.

The following is a gitGraph that was written in MermaidJS. To preview it, go to the Mermaid Live Editor.

Here is how it would look in real life:

This is an example brought from the official PlantUML Website. It demonstrates a deployment diagram. To add in PlantUML to your markdown, the administrator needs to enable it first. Read more at:

https://docs.GitLab.com/ee/administration/integration/plantuml.html Then you can just add in plantuml syntax highlighting for the code wrapped inside a code block.

Here is how this would look in real life:

geoJSON and topoJSON are geography data formats, and STL is a 3D rendering language. All three of these are also supported in GitHub Flavored Markdown when diagramming support was added (March 17, 2022).

This is only supported in GitLab Flavored Markdown

This is only supported in GitLab Flavored Markdown

Other languages are also supported by adding a specifier to the delimiters. This is only supported in GitLab Flavored Markdown. Here is an example with PHP:

This would be rendered as: 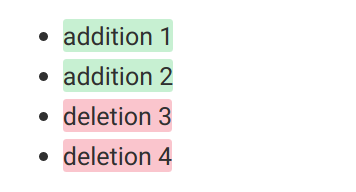 GitLab Flavored Markdown can render math and so can Github Flavored Markdown (since May 19, 2022). According to the documentation, math is rendered using KaTeX and written in LaTeX. Inline math can be rendered with $ (dollar signs). Here is an example using inline math:

This should render the Pythagorean theorem. For multiline math, just add math as the syntax highlighting specified in a multiline code block.

There are multiple types of references that can be used to refer to different repositories, people, commits, etc. Keep in mind that the same namespace trick is only available inside GitLab Flavored Markdown.

To refer to a user, just type in @user_name. The result will be a hovercard or display that allows you to view the user. Also, in some cases, it notifies that user.

The @all syntax refers to the entire team.

To refer to a project, the following syntax is valid: namespace/project>

To refer to an issue using the #ID syntax, where ID is the number of the issue. For cross-project reference, use namespace/project#ID. If the project has the same namespace, use: project#ID.

In GitLab, pull requests are called merge requests. In Github, they use the same syntax as an issue. In GitLab, on the other hand, instead of a # as in issues, you will have to use an !.

Snippets are a feature only available in GitLab. To refer to one, instead of a # present inside your reference as in an issue, use a $.

Gists are a feature only available in Github. According to a gist: https://gist.github.com/benbalter/5555251, to refer to a gist inside Github Flavored Markdown, use the following syntax {% gist ID %}, where ID is the ID of your gist. You can get the ID of your gist by referring to the URL.

Epics are a feature only available in GitLab Gold. To refer to an Epic, use the &ID syntax, with ID representing the ID of the Epic. For cross-project reference, use group/subgroup&ID.

Introduced in 13.7, vulnerabilities is a GitLab Ultimate feature, but feature flags is avaliable to all. To reference them:

As of February 3, 2022 you can reference labels in GitHub Flavored Markdown. To reference a label, simply paste the link in the format:

Here is a table brought from the GitLab documentation for label references in their Markdown syntax:

GitHub does support referencing commits just like GitLab. For referencing a single commit, just type in the commit hash, shortened or in long form, e.g. 9ba12248. If you want to do cross-project referencing, use the namespace/project@HASH syntax, or project@HASH (for same namespace).

When referencing files within the repo, use the following syntax: [README](doc/README.md). This syntax is supported by Github Flavored Markdown. Also, if you want to reference a certain line in that file, end the link with a #L{NUM}, replacing {NUM} with the line number.

GitLab does support builtin table of contents generating inside the markdown using the following syntax:

This will create a table of contents at the position where [[_TOC_]] is found. Though GitHub doesn't natively allow you to do this, there are multiple workarounds. Here are some of them: If any of the above don't work, there is a StackOverFlow question on this topic.

GitLab has a builtin feature to embed metrics into their markdown. To read into this with more detail, take a look at this article.

Blockquotes are a way to show which text you are replying to or for quotes. For example, if I am in a conversation with someone else, it can look similar to this with blockquotes:

What is the bug?

What is the bug?

The menu seems to be broken.

To use block quotes, you have to precede the line that wants to be blockquoted with a >. Here is an example:

Since May 19, 2022, GitHub introduced a way to render warnings and info boxes in markdown. To use this feature, simply insert a new blockquote before the an existing one with in bold saying Note or Warning:

Here is an example of footnotes rendering.

You can also specify images with theme context.

However there is another method which looks similar to footnotes as mentioned above. It is only supported in GitLab Flavored Markdown:

In this syntax, the alternative text comes first in square brackets and is followed by a colon and a space. Then comes the link to the image followed by the optional title text in double quotes. The GitLab documentation does not mention any support for this syntax inside videos or audio. However, the first piece of code for images that I showed above is exactly how you reference videos/audio. The file though, will be a video or audio file. In 2021, Github also, announced support for video, but didn't yet annouce so for audio.